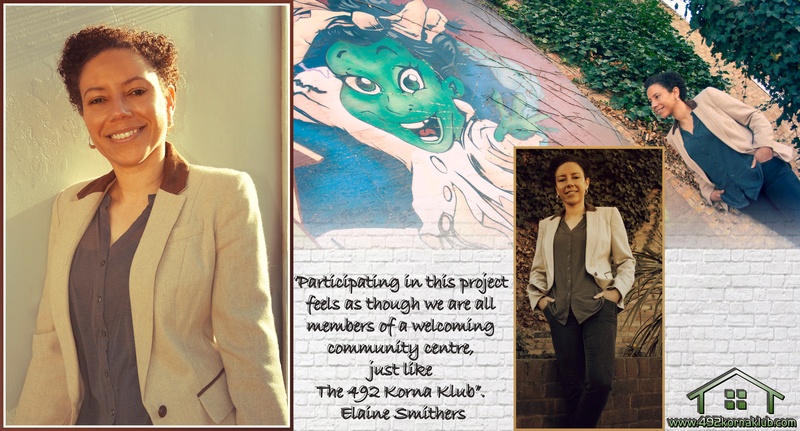 How did you get involved in acting?

I think I fell into it by accident. I took an acting course for fun and I really enjoyed it. So I thought I’d like to continue with it and see where it takes me, so I just carried on. After I finished at Morley College, a group of people on my course set up a production company, so I did a few theatre plays with them including “Owners”, “A Night Under Canvas” and “The Random Acts of Strangers”. I‘ve also appeared in TV programmes for the BBC and E4 and participated in various radio shows, but I really enjoy theatre and I‘d like to do more of that in the future.

You have done theatre, TV shows and radio shows so which one do you prefer most?

I think I prefer radio. It’s quite versatile because it allows me to be any voice I want to be and no one can see what I really look like, so I can have more fun with it. But I really like theatre as well because it’s live, it’s happening right there and then and you’ve got to get it right first time. Whereas film and TV you can re-take a scene and do it over and over again. I still enjoy TV and film but I think I prefer theatre and radio more.

I assume that you have had many auditions so I’d like to ask what is the scariest part of an audition?

The scariest part I guess is not having any idea what they are going to ask you to do when you get there. Sometimes you are asked to do really crazy outrageous things that are quite outside your comfort zone. But it’s a challenge and you just have to get on with it. The thought of it beforehand though is quite scary.

There was one audition where I was going for the part of a teacher, so I went along and they said to me “OK you have a full class of pupils in front of you, here is your imaginary chalk, here is your imaginary blackboard, now take the class”. So then I suddenly had to become a teacher and decide what class I was taking and make really quick decisions right away. I think I decided on an astrology class in the end, I remember talking about the planets and the sun a lot, it felt as though I was standing up there for ages. I didn’t even get the part in the end, but it was all good experience.

Which characters are you playing?

I am playing Martha Williams the office manager of the 492 Korna Klub Community Centre. Martha deals with the administration; she is a great organiser and supports her boss Carl Proctor, the centre manager.

My other character is Eleesha Johnson, Winston’s ex girlfriend. Winston is one of the children of Mr. and Mrs. Henry who own the community centre. Eleesha and Winston have a child together, Robert, who is 20 years old and has served time in prison. But Eleesha doesn’t care too much for the Henrys, because they haven’t treated her well in the past.

Are these roles any different from what you have played before?

I like both of my characters and I’m still getting to know them. They are quite different from any characters that I’ve played before; both of them are multifaceted and have quite complex back-stories. Martha usually seems organised and calm on the outside, but she goes through periods of being quiet and withdrawn. Secretly she is under a lot of pressure at work and at home.

Eleesha is a mother of 6 and has had quite a tough life bringing up all of her children practically by herself. Others always unfairly judge her and because of that her attitude towards people has become very defensive.

Do you feel that you identify with the characters you play, especially Martha?

A little bit. Martha is a hard worker but quite a timid sort of person and she‘s got a lot of things going on in her private life which she doesn’t openly share with the rest of her colleagues. I suppose we all have stuff going on in our private lives that cross over into our working lives, so I can relate to her in that sense. However, I don’t think she’s having a good time at home with her husband and she never stands up for herself, whereas Eleesha defends herself whenever she needs to, so I can identify more with her character in that instance.

What is the most challenging part of this project?

There is a lot of improvisation involved in this project which helps with character development and that can sometimes be a challenge. Also, this production gives the listeners the opportunity to call into the radio station and ask the characters specific questions. So we’re placed in a ‘hot seat’ and have no idea what the listeners might ask and that in itself is challenging. So knowing our characters inside out will help us to give a true answer.

If you could star in a remake of a classic film who would you like to play and which film would you choose?

I think I‘d like to play the part of Kathy Bates in “Misery” because at first she seems to be such a nice, kind, ordinary fan of the protagonist, but then her character suddenly switches and she turns into a complete baddie. I think I’d quite like to play the part of a baddie. I don’t normally get to play a villain or a wrongdoer and I am not that type of person in real life, but I‘d quite like to spend time developing a character that people love to hate and play somebody completely different from who I am. I think that would be a lot of fun to do.

Since acting in a very competitive field, has anyone discourage you throughout the years?

Well it’s funny because when I tell friends what I’m doing, some of them say, “why don’t you go and get a proper job?” But they don’t mean anything bad by it they just don’t ‘get it’. The only person who has really tried to discourage me was a tutor I had on a short acting course. I think perhaps he had had a bad experience in his acting career and he tried to put us all off of taking the same path. He said “I am taking this class today but I don’t think it’s worth pursuing acting because it’s just a waste of time”. I think most people on the course were really surprised by what he said but I don’t think anyone really listened to him or were discouraged from following their acting dream.

Have you learned or gained something specifically from the roles you play in this project?

I think I’ve learned that because this is a radio drama it’s essential that every character I play sounds completely different from the next. This is very important for the listeners because they don’t have any visual references to rely on and can only build up an image of a character by the sound of that characters voice. I’ve gained lots of experience too. It’s been different from previous projects I’ve worked on, there are a lot of people involved and when we meet up and come together for rehearsals, everyone brings along food to share, stories to tell and jokes to crack. There is always lots of laughter and friendly banter and it feels as though we are all members of a welcoming community centre, just like The 492 Korna Klub.